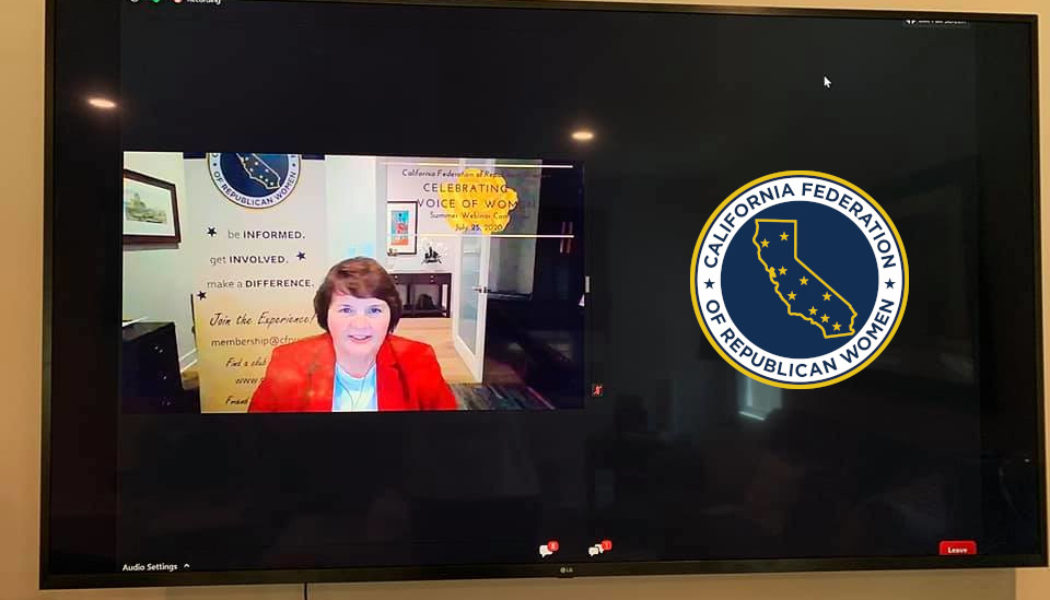 OVERWHELMINGLY SUCCESSFUL
CFRW HISTORY WAS MADE!

The California Federation of Republican Women held its first virtual conference entitled “Celebrating the Voice of Women.” It was a smashing success! CFRW 1st Vice President and Conference Chair Janet Price did a wonderful job of organizing and arranging for Republican speakers, politicians, and workshop instructors from all over California and the United States. CFRW Communications Director, Mary Baker, took on the task of technically putting on the full day conference. The California Federation of Republican Women came together, virtually, to create a magical day for the 500 + attendees.

Conference producer Mary Baker put together a series of vignettes that played throughout the morning on Susan B. Anthony, Jeanette Rankin, and other historic figures in the suffragette movement, as well as videos on the history of the suffragette movement. NFRW Recording Secretary and Region 2 Director Vanessa La Franco addressed the audience on the great importance of utilizing modern technology to help Republicans achieve our goals in the November 2020 election and beyond.

Among many Republican candidates and speakers, the conference also featured Rebecca Kleefisch, former Executive Director of Women’s Suffrage Centennial Commission and the former Lieutenant Governor of Wisconsin who gave a rousing speech on the suffragette movement in the United States and how that relates to what we, as Republican women, are doing today.

Presentations were given on three of CFRW’s favorite projects, the Gary Sinise Foundation, which is our statewide Caring for America Project, the Young America’s Foundation, which is our statewide Scholarship program and the Mamie Eisenhower Library Project (MELP).
Charlie Kirk, Founder of Turning Point USA, was the keynote speaker for the day. His topic was “Cancel Culture” and he was compelling. He addressed the need for all Republicans to stand up and be heard and to fight against what happening within our culture. His main point was that we need more Republicans to engage, have their voices heard and make Republican politicians accountable.

The morning session ended with a surprise guest, Dinesh D’Souza. He thanked CFRW for all that we do and then showed a short promotion of his new movie “Trump Card”.

The underlining theme for the day was 1) Technology is here to stay, we need to embrace it, 2) Our membership numbers need to significantly grow so that CFRW can affect change in California and 3) History, indeed, was made by CFRW having its first conference as a webinar.

This was the first conference of its kind produced by a state federation in the NFRW and it took a great deal of work to pull it off. We were in good hands when Mary Baker, producer, took on the technical challenge of putting on a full day webinar. Ingrid Lake, assistant producer, proved invaluable.

CFRW plans to continue to do webinar conferences as we go through the COVID19 lock down.