The California Federation of Republican Women was organized in January 1925. Although women in California have had the right to vote since 1911, the women of Southern California did not become actively interested in good government until the ratification of the 19th Amendment, which granted equal suffrage, in 1920. They organized the Los Angeles Republican Study Club with Mrs. Florence Collins Porter as leader. This Study Club became a model for other cities. 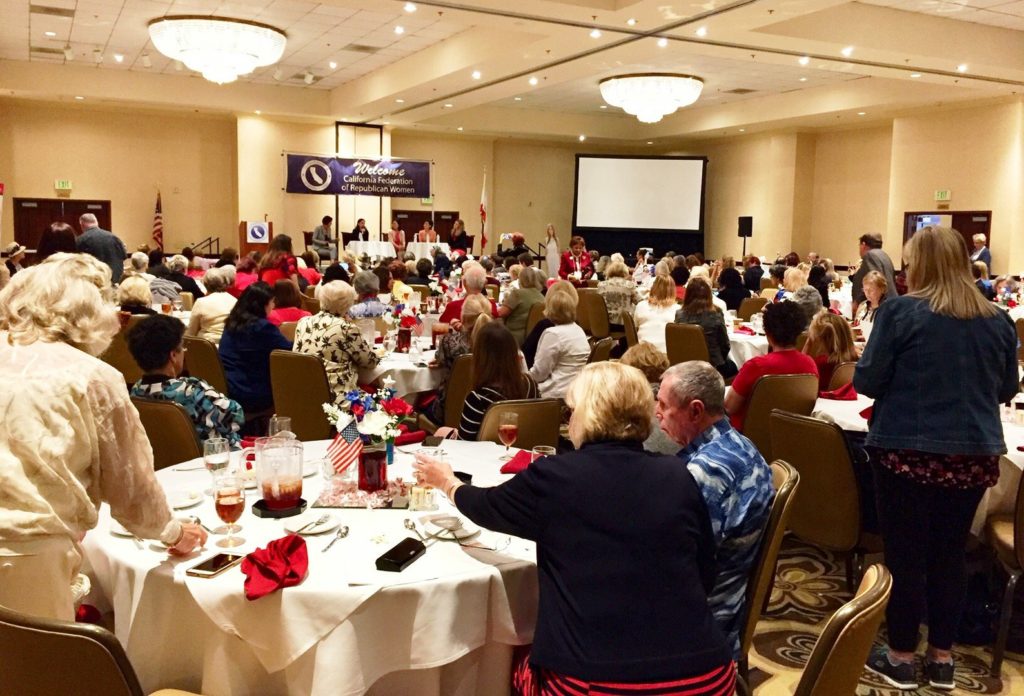 Mrs. Porter served as an Associate Member of the Republican National Committee. In 1924, while continuing her efforts with the Republican Study Club, she seconded the nomination of Calvin Coolidge for President. In January of 1925 three women issued a call to women of various clubs in Southern California and to women in San Francisco and Berkeley, to attend a meeting in Los Angeles. At this meeting the California Federation of Republican Women was formed. Mrs. Porter was elected President of Southern Division and Mrs. Parker Maddux, of San Francisco, as President of Northern Division.  In 1937-38 Central Division was formed.

Mrs. O. P. Clark was the first CFRW President, 1925-1931. She also was elected in 1924 to serve as the first National Committeewoman from California.

Throughout the years the Federation continued to grow in membership and activities. The members worked on campaigns, taught English and Americanism to the foreign born, and held political seminars throughout the State with the goals of electing Republicans to public office; promoting participation of women in politics; informing members on current legislative issues; providing membership input to legislators at local, state, and national levels; and developing a community volunteer program to address important social issues and concerns.

In 1970-1971 the first statewide Spring conference, emphasizing legislation, was held in Sacramento; thus began the education of CFRW’s members on the issues in the Capitol.

In 1972 a “Talent Bank” was established to encourage Republican Women of outstanding ability to seek elective office or appointments to state commissions and boards.

In 1974-1975, President Marie Solberg followed suggestions by Governor Ronald Reagan and legislators that the Federation should be a viable force in the legislative process, CFRW established an advocacy program. The purpose of this program was to put CFRW in direct communication with members of the State legislature. Nancy Ehlers was appointed the first chairman and in 1976 was registered as the first full time (volunteer) CFRW lobbyist.

Issues Chairmen were appointed statewide to study proposed legislation and prepare “pro” and “con” analyses to be reviewed by the 3 division presidents and the state president and 3 vice presidents in deciding whether CFRW would support or oppose said legislation. The Advocate in Sacramento monitored and reported on the progress of specific bills through the legislature.

An Action Alert Hot Line was also organized in order to ensure fast statewide CFRW member response to pending legislation or other action when needed.  We were on our way!

Many things have changed over the years. We have updated our office equipment to handle today’s “electronic highway.”   In 2020 we changed the structure of our state federation to 9 Regions, each with a Regional Director, rather than the three divisions we had in the past.  We also updated our website and moved it to a new system to better serve the growing needs of the organization.  Women are the powerful force for the 21st Century and the California Federation of Republican Women is helping to lead the way!