The Federation of Republican Women has both a National and State Structure. State Federations that are chartered under the auspices of NFRW run under their own set of bylaws. Those bylaws, although independent, may not be in conflict with bylaws set by NFRW.

The California Federation of Republican Women is a special and diverse entity. Thus, our State Federation is divided into 9 regions and units throughout the state which accommodate our size and diversity. Each entity is both dependent and independent.

Relationship to the Party

While the functions of each are distinct, the National Federation of Republican Women is an official associate of the Republican National Committee. While not under the party’s control the NFRW cooperates with and aids the Republican Party.

The National Federation of Republican Women is a national grassroots political organization composed of 2,000 Clubs in 50 States, the District of Columbia, Guam, Puerto Rico, and the Virgin Islands comprises approximately 50,000 members. 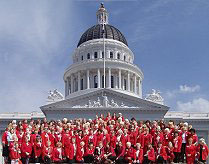 While officially an affiliate of the Republican National Committee, the NFRW is self-supporting. Approximately 1/3 of NFRW’s operating budget comes from membership dues and club service charges. Another 2/3 comes from major donor programs such as the Capitol Regents, the Regents and the Federation Trust.

NFRW concentrates its efforts in the areas of education, communication, legislative action, candidate recruitment, campaigning and fundraising for NFRW programs and events.

NFRW and CFRW do not directly form party policy. However, through their educational programs, the Federation does exert influence on Republican legislators and party officials, local, State and National.