California’s Assembly Bill 5 (AB5) is a new law that significantly redefines what constitutes an “independent contractor.” Legislative Democrats passed the Bill and Governor Newsom signed it into law in 2019.

Effective January 1, 2020, hiring entities are required to classify workers as employees unless they meet all conditions of the ABC test:

B. The person performs work that is outside the usual course of the hiring entity’s business.

C. The person is customarily engaged in an independently established trade, occupation, or business of the same nature as that involved in the work perform

The defenders of AB5 argue they had to pass the law to codify the Court’s decision. However, the Legislature could have chosen a different path than AB5. It did not need to pass a one-size-fits-all law that contained numerous exemptions for various professionals. The arbitrary nature of who received exemptions and who did not reveals the unfairness of AB5.

Recognizing the significant problems with AB5, Senate Republicans offered more than a dozen amendments in 2019 to fix its flaws. Democrats voted down every single one without any discussion.

In 2020, Senate Republicans have introduced 11 bills as part of our legislative package to fix AB5, including the main legislation, Senate Bill 806, which would repeal and replace AB5. In addition, members have introduced bills that would protect many of the industries severely harmed by the anti-worker law and that were left out of AB5. Click here for additional information of Senate Republicans’ legislation.

Our Republican Caucus agrees that AB5 needs to be repealed. We need to help get this story out to EVERYONE — voters, independent contractors, business owners, etc. What Newsom is doing right now with AB5 has the potential to hurt millions of Californians.

To help facilitate the repeal of AB5, Carl DeMaio, Chairman of Reform California, has started a petition campaign to gather thousands of signatures online to demand Govenor Newsom act NOW and suspend AB5.

Please go to DefendFreedomtoWork.org and sign the petition today.

Now is the time to help those who have lost work — and the way we do that is to hold California politicians accountable for any unnecessary burdens they are imposing on small businesses or workers. 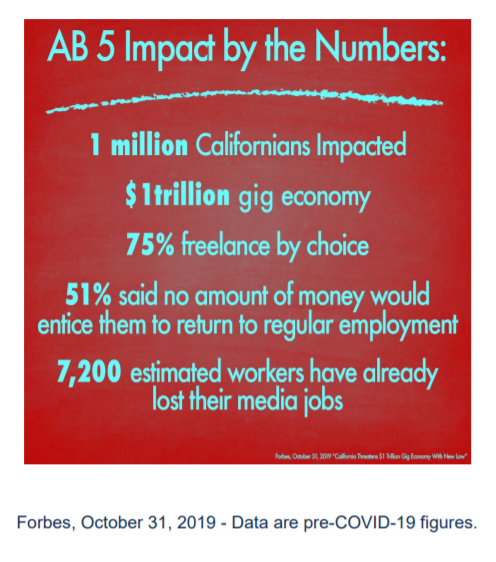